Pete Cochrane (61) is from Penrith in Cumbria. He has had an HGV licence for 40 years and currently works for Samworth Brothers where he is a team leader. His experience as a truck driver has taken him to three different continents and he has had many high profile jobs including working in the motor sport industry. He was also recently nominated for the Microlise driver of the year award. 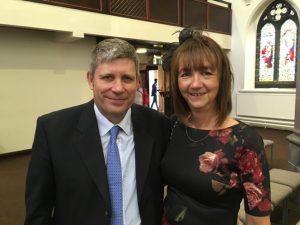 Although Pete was used to working long hours, and therefore no stranger to tiredness, when his wife Jacqueline was diagnosed with breast cancer in 2011, his sleep was further disrupted due to worry. At the same time he recognised that his tiredness had become much worse – he struggled to get up in the mornings and felt constantly exhausted. He saw a programme on the television about sleep apnoea, and Jacqueline mentioned that she had noticed him struggling for breath when he was asleep.

He went to see the doctor who increased his blood pressure tablets, but Pete insisted on a referral to the Freeman Hospital in Newcastle, which had been mentioned on the programme as one of the leading sleep units in the country.

Once at the Freeman, Pete underwent tests and was asked to do an overnight sleep study at home, the results of which confirmed that he had sleep apnoea. At this point, the consultant mentioned that because he was a truck driver, he would need to notify the DVLA, and that he wouldn’t be able to drive until his treatment had taken effect.

Thankfully the Freeman had a cancellation and, knowing that he drove for a living, they offered an appointment two days later. Pete was put on CPAP treatment and took home a machine to start using straightaway. The first night of using CPAP, despite some initial discomfort, was the best night’s sleep that Peter had had for a very long time!  Today he recognises this was a turning point and that from then on the quality of his sleep improved dramatically.

Recognising the impact of the treatment, Pete was determined to make it work. He went back to the Freeman a fortnight later and the team helped him to overcome a few minor issues such as fitting a mask that was more comfortable, and changing the air pressure, both of which alleviated any discomfort. Following this appointment, the consultant confirmed that Pete could drive again and notify the DVLA that this was the case.

Although not particularly heavy, Pete read that many with OSA are overweight so he decided to lose some weight himself by reducing snacks and portion sizes, as well as walking whenever he can. He has steadily lost a few pounds and feels healthier as a result.

Looking back, Pete realises he has much more energy since starting his treatment. He feels that the symptoms were masked by worrying about his wife during which was obviously a very stressful time (Jacqueline is now thankfully believed to be in the clear). Pete is grateful that he was diagnosed and able to get treatment quickly. In the early days, he couldn’t wait to get home and use his CPAP machine as he knew that his sleep and breathing would be better.

As a professional driver Pete feels very strongly that he has a responsibility to speak up about sleep apnoea and to encourage his fellow drivers to come forward if they feel they have symptoms of the condition.

He says, “There is no defence for injuring or killing someone, and an HGV driver may be dealt with more harshly if this happens. As professional drivers we have a greater penalty to face if we have an accident and besides which no one wants a death on their conscience.

“If you are a truck driver, ask yourself if you are in full control and find yourself falling asleep during the day. If you snore or your partner mentions that you struggle to breath at night, I highly recommend that you go to your doctor and don’t take no for an answer, insist on a test”.

“My brother was killed in a road accident in 2015 – not by a driver with OSA, but it was a very distressing time for our family. Ironically the CPAP machine helped me get through what was another very difficult time.

“As a professional driver, I want to raise awareness of the dangers of sleep apnoea, particularly among the truck driver community. I remember when we were thought of as knights of the road, and I would like to think that we are proud of our profession which means being the safest drivers we can possibly be.”

“We are very aware that for vocational drivers, quick access to treatment can make the difference between an individual either deciding to seek help, or deciding on the alternative of continuing to drive because they are fearful they will lose their licence, and thus their livelihood”.

How to Get Involved

We welcome support, particularly from healthcare professionals, politicians and Government officials and the logistics industry.

Visit our Twitter page to find out all of the latest goings on in the OSA world. Make sure to follow us to keep bang up to date..

Along with our new Twitter feed, you can also visit our Facebook page for more OSA news, links and useful information.

To find out more about the OSA Partnership Group, contact: